History of the Spaniels we have or have had. 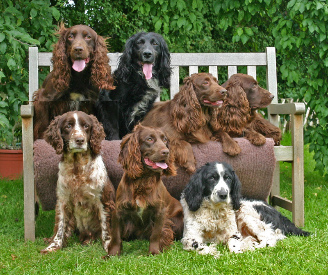 Rich has always been a Spaniel man & it does not matter if a dog is Pedigree KC registered or unregistered or a Crossbreed or mongrel as long as it does the job required for a gamekeeper ! When we met I only had Golden's, although I had also owned an English Working Springer back in the 1970's. When I first met Rich he had a motley crew, Bib [Bring Um On Bib] a KC registered Black Working Cocker, Brace a Black & White unregistered Working Springer, Berty a rescued  Sprinador [1st cross between a Springer & a Lab] these 3 were great workers & Bruno [a mix between Golden, Lab & GSD, but looked more like a Golden], who never really took to working as a Gundog.

Knowing how good Brace was at his job in the field he was used on an unregistered Springer bitch & Rich was given Bridie instead of a Stud Fee [a Brown & White Springer]. Then during the 1990's we were also given 2 KC registered Working Cocker bitches on breeding terms, Crisp  [Amerdown Crisp] a Gold  Cocker & Tess [Amerdown Tess] a Lemon Roan Cocker. Then in the early 1997 we were given our first Sussex Spaniel Patchinhall Tess, commonly known as Ellie. She was previously owned by my boss at the time, who's main breed was Clumber's. But Ellie used to get Phantom pregnancies after every season & my boss got fed up with this & as I had always loved Ellie she was given to me. At the time she was in season so Rich & I decided that maybe if we gave Bib, [who was 10 by this time], the chance to mate with Ellie, who was just 3, we hoped this may kill two birds with one stone, by giving Rich the Bib baby he had always wanted & also stopping Ellie's phantom pregnancies. Well it did just that & Tucker a Chocolate Dog was kept from that first litter, in turn he became the first of the 'Chocdrops'. There were 4 Chocolate & 4 Black in that 1st litter.

This first mating between Bib & Ellie proved to be so succesful that many people both in the Shooting Field & out of it asked if we were going to repeat the mating. So Ellie had 2 more litters by Bib & from the third litter we kept Twig a Chocolate bitch. Bib was 13 by that time.

Now that Bib seemed to have worked out what sex was all about it was decided to try mating him to Crisp after mating him successfully to Ellie. This produced a litter of all black  KC Registered Working Cocker puppies and Bandit was kept from the litter & when he was old enough he learned the job of being a Stud Dog ably assisted by the sex mad Ellie for Ellie's final litter !

We very sadly lost Ellie with Cancer in 2001, but having Twig we were able to continue the line of Chocdrops.

Then in 2004 Tucker & Bridie who were kenneled together decided to try for a litter, this was not our plan, as we did not even know Bridie was in season. This in turn produced a litter of which 3 were Brown & White like Mum & 5 were Chocolate like Dad. We kept Truffle  a Chocolate one from this litter.

The first & second time we mated Twig we put her to a KC Registered Liver Working Cocker [Bradlyycourt Tueted] commonly known as Flake or Glos Flake. This produced all Chocolate puppies & we kept Tillie from one litter & Teal from the other.

Then in 2011 we used a KC Registered Sussex, Glenbrows Had To Be, commonly known as Henry. Knowing what we know now we wish we had kept one from this litter, but hindsight is a wonderful thing.

In 2013 we were offered a KC Registered Sussex dog namely Micky [Belcam Micky Taker Among Purbarn] our second Sussex & if in the future we are unable to find a Sussex Bitch with which to hopefully mate him, he may meanwhile be used on one or two of the Chocdrops owned by others. So hopefully the Chocdrops will continue  as they are extremely versatile little dogs with great characters & working ability, They excel as family pets but also in the Shooting Field both Beating or Picking-up & they are great at Obedience & Agility & above all they are extremely affectionate !! With as the KC's  motto states being Fit For Function !

Since being given Micky we have had rather a lot of flack from The Sussex Spaniel Association (some members more than others seem to have a vendetta against us). This is because as they say they want to keep 'Their Breed Pure'  As we have said we are not stopping them & have no intention of undermining the Pure Bred Sussex & we do not plan to ever do so. We would like to breed Pure Sussex, but unless someone with a litter of Sussex is prepared to sell us a bitch that could be mated to Micky to produce Pure Sussex Spaniels we will continue to breed the Chocdrops who are not designer Dogs & we do not charge deringer Dog prices for them ! Oh & why we are getting all the flack we are not quite sure as we have now found out others have done the same sort of thing too !

At this time we don't now have any Chocdrops we can breed from so our Chocdrop line has come to an abrupt end !

The tables have turned and  nature has taking its course as Teal had a blank season and as her and Micky were living in the same kennel together they decided to keep the line going. We did not keep anything from this mating as we did not want to antagonise the SSA people. But we gave one to our Grandson to work on the shoots. One day when Twix was almost 3 Jack decided along with his mother that they would like to mate Twix and Jack found a great Black Working Cocker that he thought might be a great sire.

So on Christmas eve Twix & Piper met and the rest is history as they say. So the line is continuing as although we did try and become members of the SSA and had been proposed and seconded by 2 well known Sussex Breeders the committee turned us down. This  was probably a bad move on their part as if we are not members we do not have to do what they say or abide by any of the SSA rules or regulations. So the Chocdrop line will continue one way or another whether the SSA members like it or not !

So watch this space !